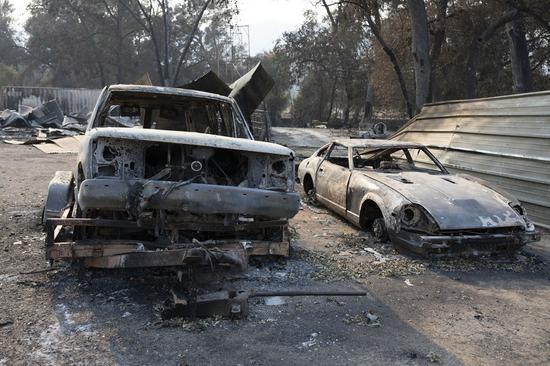 Photo taken on Aug. 28, 2020 shows the wreckage at the site where a wildfire swept through in Vacaville of Solano County, Northern California, the United States. (Photo by Li Jianguo/Xinhua)

Three big wildfires near the San Francisco Bay Area, started by lightning a month ago, were almost completely contained Saturday, but major fires continue to burn in Northern California, according to updates by the California Department of Forestry and Fire Protection (Cal Fire).

The state's biggest-ever fire, the August Complex in Mendocino and Humboldt counties, has raged through 832,891 acres (about 3,371 square km) and was 30 percent contained Saturday morning. The fire burned mainly through forest land, destroying 51 structures and causing thousands of evacuations.

More than 2,100 firefighters, including out-of-state aids from Montana, New Jersey, Texas and Idaho, are battling the blaze, according to a Saturday report by the San Francisco Chronicle.

The North Complex Fire, burning in Butte, Plumas and Yuba counties, has killed 15 people and damaged 1,147 residential and business buildings. It became the fifth-largest fire in California history on Thursday and burned 289,951 acres with 58 percent containment as of Saturday morning.

Nearly 3.5 million acres of land have burned from wildfires in California so far this year, 26 people have died and nearly 6,300 structures have been destroyed, according to Cal Fire.

The Bay Area was expected to enjoy clean air and clear skies this weekend and into next week, according to the National Weather Service. No rain is expected to come for the next 10 days to two weeks.

Most popular in 24h